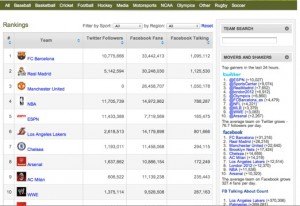 Coyle Media has prepared a web-based sports fan graph that tracks the number of fans following professional sports teams around the world.  We see some bugs in the data, but directionally Coyle Media is doing really nice work.  Pat Coyle also blogs on subjects that are near and dear to our heart such as how much we dislike cell service inside stadiums.

The table is worth spending some time with.  While the top spots for social media are dominated by familiar sports and teams such as soccer and FC Barcelona, ESPN, the NFL and the NBA,  make sure you click on the “Other” tag because you will see that the WWE and UFC have much stronger social media platforms than say the NFL.

Each of these teams and the leagues have passionate fans that would love to voice their opinions.  You+Media and DIRECTV have created the Dan Patrick’s Box Score social engagement platform.  This social engagement platform will now allow avid sports fans directly engage with the Danettes on the Box Score television show.  Sports teams, brands that rely on game day watching, leagues and other sports related entities now have a three screen solution, connecting avid sports fans online, mobile and television.