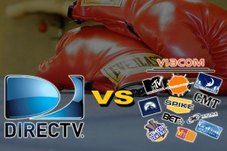 Jersey Shore and Spongebob fans were dealt a low blow this past Wednesday when the dispute between Viacom and DirecTV resulted in the very public pulling of channels like Nickelodeon, MTV, VH1 and Comedy Central. The blackout is the result of a failure to determine how much money DirecTV will pay Viacom for channels that have become household staples. Further aggravating the issue is the presence of free or low-price online outlets like Netflix or Hulu which have already had such an impact on the way people watch TV.

When will the beloved channels return? Will they ever?